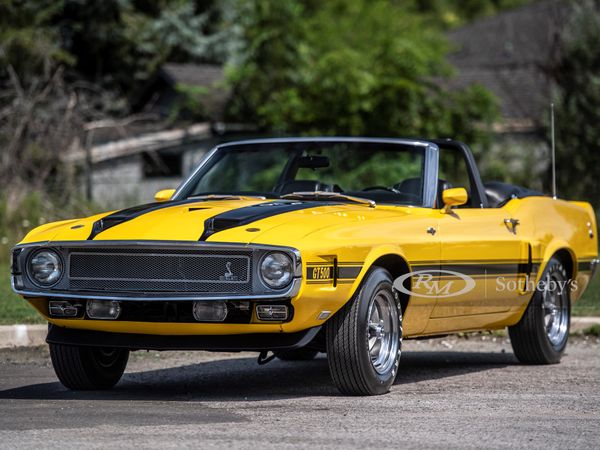 A highly desired car that is a favorite among collectors, the classic Shelby GT500s with the heavy-duty suspension and Cobra Jet 428 V8 engine are rare gems to behold. In fact, only 335 convertibles were built between 1969 and 1970. Making this bold beauty even rarer is that this 'special paint' Shelby GT500 convertible ordered from the factory is just one of nine in Grabber Yellow (3470-A). To narrow that number down even more, this is just one of 6 finished in the bold hue for 1970. The good news is that RM Sotheby's is offering the opportunity to take home this stunning and rare 1970 Shelby GT500 428 Cobra Jet Convertible for yourself in their Online Only: Driving into Summer auction from May 21st - 29th.

Built in Dearborn, Michigan, this gleaming Shelby Ford Mustang is the product of a fresh and outstanding restoration performed by a Shelby marque specialist. The car has incredibly low mileage since its complete restoration. Appearing as if it just rolled off the assembly line, it's hard to believe that this vintage pony was once involved in a fire back in the 1970s.

Glowing in aforementioned Grabber Yellow, this bold classic is in fantastic shape. Covering the cabin is a white power convertible top complete with a glass backlite, and Goodyear rubber can be found on all corners.

Powering this potent Shelby GT500 is a 428-cubic-inch big-block Cobra Jet V8 engine backed by a C6 select-shift automatic transmission that twists its original 3.50 Traction-Lok rear axle. This setup was advertised as producing 335-horsepower, but that was highly underrated considering that the actual number was closer to 400-horsepower. This example is just one out of 54 convertibles to feature this powertrain for the 1970 model year. Handling is kept in check by the highly coveted heavy-duty competition suspension. Power steering allows for maneuvering turns easily, and power front disc brakes bring all that power to a stop.

This vintage Shelby GT500 Mustang is listed in the SAAC International Registry which notes the fire from the '70s and mentions that the car has since been fully restored. Even more, this classic can also be found in the American/Team Shelby factory database. Also according to the SAAC Registry, this car was sent to Minneapolis, Minnesota to Minar Ford back in 1969.

The sale of the car comes with documented by factory order sheet and rare Ford-to-Shelby-to-Dealer invoice, the Deluxe Marti Report that confirms the options and production details, original owner's manuals for the 1970 Mustang and Shelby GT350/500, documentation dating to 1970, and a copy of a full-page article in the automotive magazine called Auto Strada.

If this beautiful 1970 Shelby GT500 428 Cobra Jet Convertible is the perfect addition to your life and to make those sunny weekends even brighter, check out RM Sotheby's in the time-based auction Online Only: Driving into Summer from May 21st through 29th.