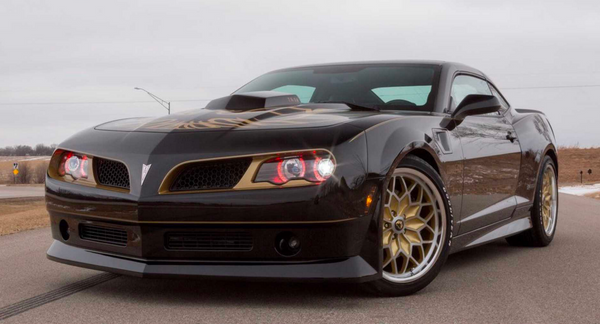 This Trans Am Worldwide Camaro is the Pontiac Muscle Car everyone hoped for.

In 2007, when word got out about the Camaro making its big come back, Pontiac fans were filled with excitement at the possibility that the Trans Am could do the same. Although that hope was crushed in 2009 when GM dropped Pontiac from its lineup - the Poncho nostalgia continued on for many enthusiasts.

Licensing the name and logo from GM, Trans Am Depot picked up where GM left off. The company, along with the help of the Bandit himself, took 77 2015 Chevrolet Camaros and turned them into modern editions of the 77 Trans Am featured in the Movie - T-Tops and all.

While all of the cars made sold pretty quickly, Restore A Muscle Car is offering enthusiasts a second chance at owning one of these masterfully built and highly collectable cars. Number 74 of the 77 built features a 7.4-liter supercharged engine that produces 840-horsepower, a six-speed manual transmission, and suspension and braking systems that are up to the task of handling all that power. Making the ride just as comfortable as it is thrilling, the car features a custom black leather interior and the late Mr. Burt Reynolds autograph and custom Bandit badging.

As seen in the pictures on the site, this car seems to be well taken care of and only has 2,500 miles on the clock. The build is well documented and comes with a certificate of origin and a custom document folder, along with a custom embroidered car cover, bandit driving gloves, and embroidered polo shirt.

Trans Am Depot has not only captured the essence of the Bandit Trans Am with the ultimate bring back, but added so much more to it. While this is a highly collectable car, it was made to be driven and we can only hope to see it screaming down the road someday soon.