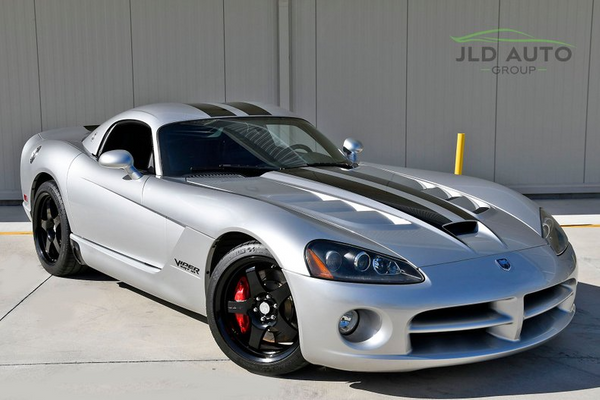 Every Dodge Viper is special, but this one is more special than most. It's part of a special limited edition run built to commemorate a special event.

That event was the 10th annual Viper Owners 10th Invitational, which took place in Detroit, Michigan in 2008. The event ran from August 27 through 31, and was only open to Dodge Viper owners.

Dodge intended to build 100 Vipers to commemorate the event, but just 77 were produced. All of them came out like this, in silver with black stripes.

The car seen here, serial #17, has just 5,900 miles. According to its auction listing, this car has spent its entire life in Florida.

Like all 2009 Vipers, this limited edition model is powered by a normally aspirated 8.4 liter V10 rated at 600 horsepower. The rest of the drivetrain consists of a Tremec T-56 six-speed manual transmission and a Dana 44-based rear end that included an electronic limited slip differential.

Zero to 60 sprints take place in under four seconds, while the Viper's top speed is stated to be over 200 miles per hour. Even a decade later, those are impressive numbers.

You may not be able to buy a new Viper anymore, but low-mileage examples like this one allow you to come close. If you weren't invited to the 10th Viper Owners Invitational, we're pretty sure that this car would make you a shoo-in for next year's event.

You can find this 2009 Dodge Viper SRT-10 VOI-10 Edition in Stuart, Florida, offered for sale by Awesome Joe Auctions. With just 77 produced, this is one rare machine indeed, so act fast.