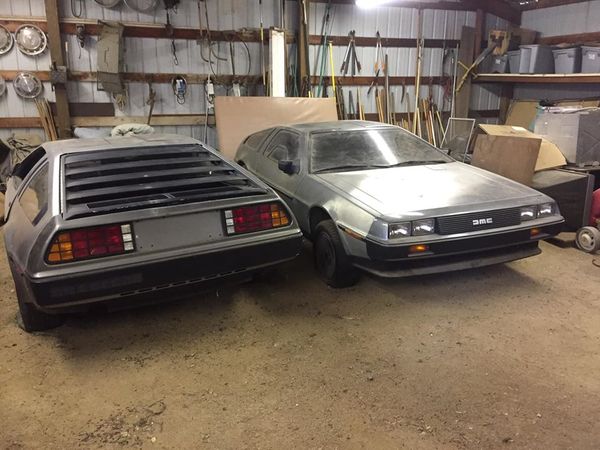 Found on the Facebook Marketplace, these DeLoreans will take you back in time!

The DeLorean is one of the most unusually designed vehicles with an even more unusual history. It was not produced with any of the initially rumored features and it had very few things in common with the prototype and yet it still made it off the line as a car that appeared to be in many ways ahead of its time. However, the early production DeLoreans were riddled with issues and the performance of the vehicle was just not up to par for a sports car that cost as much as it did.

Despite its short-comings, the DeLorean was still able to gather quite a following and went down in history as a highly sought after car. Today, it is not uncommon to see a perfect condition, low mileage example going for double of its original starting price. So finding one in decent shape that has less than 2,000 miles on the clock that hasn’t been touched since 1981 for $25,000 is not too shabby of a deal, but what about two?

According to a Facebook Marketplace ad, these two consecutively VINed DeLoreans have been hiding in a California barn for the past 39 years. One of them is complete with only 1,623 miles and the other is “partially apart,” whatever that means, and has only been driven 14 miles. They are being sold as a pair and are listed for sale at $50,000, which seems like a fairly reasonable deal for two cars based on the photos and what little information is in the add.

Both cars seem to be in an easily restorable condition and the VIN plates indicate they are in fact 1981 year models that were made in March, 1981. The limited details about these cars and why they were hidden away for so long is very mysterious and only adds to the DeLorean's odd history.