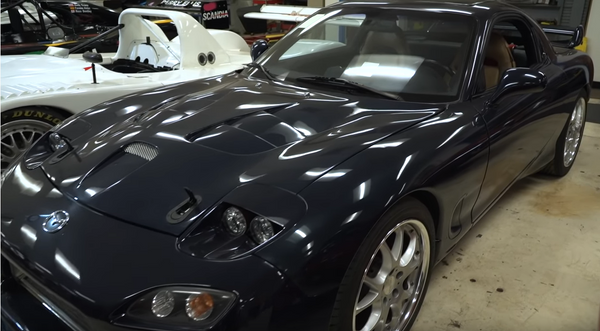 Who knew so much JDM goodness was stashed away in Atlanta?

Driving around the country looking for hidden-away cool cars in every nook and cranny is like a dream job. The fact Tom Cotter actually gets paid to host Barn Find Hunter is simply amazing. His adventures allows us to vicariously live through finding some rare Chevy Corvette or Duesenberg squirreled away somewhere, a thing most of us never will do. This time around he’s hitting up the Atlanta area during the rain. Thankfully the barn find prospects aren’t as gloomy as the weather. In fact, Tom runs into some great classic Japanese cars, something you don’t see too much on the show.

Jim Downing, an old friend of Tom’s and the co-inventor of the Hans Device, has been involved in motorsports since 1974. His shop is loaded with plenty of rotary-powered cars since he was a pioneer of rotary racers.

Among his collection is a 1967 Mazda Cosmo, which had the first rotary engine. The car is a JDM import, so you’re not likely to stumble across many in the US. One of the most lust-worthy vehicles is a 1995 Mazda RX-7 with a three-rotor engine imported from Japan. Downing claims it’s pushing about 450-horsepower, which is considerable for such a lightweight sports car.

Also contained in the garage are Mazda race cars from a couple of decades or so ago. One is unfinished but is going through the early stages of a complete restoration, so you can see the structure clearly for the lack of body panels. There’s also a 1978 Mazda RX-3 racer Downing himself ran in the Champion Spark Plug Series, capturing the championship in 1981.

Of course, Downing has more that just rotary models in his shop. In fact, up front is a nice Lotus Super 7, a notoriously stripped-down roadster which certain embodies the mantra of “simplify, then add lightness.”

While this episode didn’t include any barn finds, Tom did show us something you most likely would never see. Jim Downing’s car collection is quite unique, so we can forgive it’s not a bunch of old Shelby Mustangs sitting in a dusty barn.