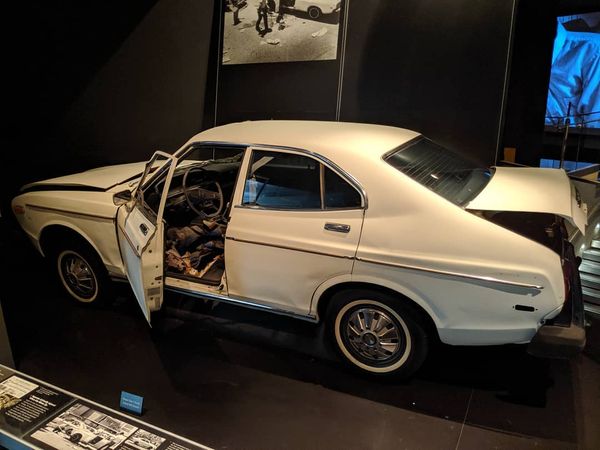 It all boils down to whether the Datsun should be displayed or destroyed.

June 2, 1976 is a day which rocked the journalist world. Don Bolles, an investigative reporter for the Arizona Republic, climbed into his white Datsun B210 sedan only for six sticks of dynamite planted under the driver’s side floorboards to detonate. Bolles survived for several days before succumbing to injuries from the car explosion. Later it came out this cowardly deed was the result of Bolles digging into details of the Mafia’s influence in America, although justice was served slowly. Now, over 40 years later, controversy continues to rage over how this tragedy should be remembered.

Bolles’ Datsun in its bombed-out state was on display at the Newseum, a museum dedicated to the freedom of the press, although that installation is now closed. You might think it was a nice tribute to the fallen journalist, but some of his colleagues strongly disagree. They not only think the car shouldn’t be displayed to the public again, but that it should be completely destroyed.

We as a society have an interesting fascination with death, including when it involves a vehicle. For example, people flock to see Bonnie and Clyde’s Death Car, and there were convincing counterfeits made of it back in the day by those who wanted to profit off displaying them. The Ford limousine carrying John F. Kennedy when he was assassinated, a modified 1961 Lincoln Continental 4-door convertible code name X-100, is on display at the Henry Ford Museum.

The late reporter’s daughter, Frances Bolles Haynes, has said the display of her father’s car was “grotesque.” She further elaborated on the pain of having people simply “gawk” at the car as some sort of sideshow. Fellow journalists argue that the objection of just one immediate family member should be enough to make the move unethical.

However, Rosalie Bolles Kasse, his widow, was the one who donated it to the museum. And while the Newseum is currently closed, those who run it are looking for a new location where they can put everything on display once more, including the bomb-damaged Datsun.

An outspoken advocate of keeping the car on display, George Weisz worked on the Bolles case as a member of the Arizona Attorney General’s Office. He views displaying the car as a touching tribute to a journalist who gave his very life to expose the truth. If the Newseum won’t be putting the Datsun on display again anytime soon, Weisz plans to work on bringing it back to Arizona for the public to view there.