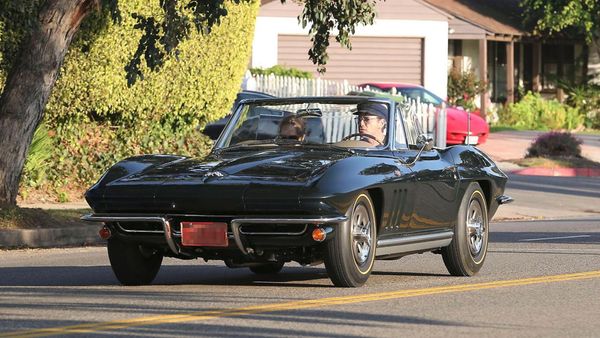 For years Robert Downey Jr. was the face of the Marvel Cinematic Universe as he played playboy billionaire genius Tony Stark. On screen, when his character wasn’t donning the Iron Man suit, he was often getting from point A to point B via an Audi R8. Not surprisingly, the movie star owns several of the technologically-advanced German supercars in real life. However, he prefers driving his far simpler 1965 Chevrolet Corvette.

Of course, Downey Jr. has a really nice ’65 Corvette convertible which looks to be faithfully restored. The star doesn’t show off the car to the press, so nobody knows too much about it. In fact, some news outlets have reported it’s a 1967 Corvette, but the three vents on the front fenders and no “Corvette” emblem on the bottom right portion of the hood, plus the front grille configuration all indicate otherwise, although there’s a slight chance it is a ’66.

Painted Glen Green, it’s not as flashy as certain other colors, but with the actor being a car buff we wouldn’t be surprised to learn that’s the C2’s factory color. It rides on 7.75 x 15-inch goldline tires wrapped around OE wheels to complete the vintage look.

It’s been photographed with Downey Jr. behind the wheel and his wife Susan in the passenger seat going for a nice drive in sunny weather. What better way to feel in touch with the road and nature at the same time?

Downey Jr.’s car collection is impressive to say the least. When it comes to the Audi R8, it seems like he has one for every Marvel movie he’s starred in. We know the 2009 Audi R8 he owns was a gift from the production staff of the first Iron Man.

See our comprehensive vehicle overview for the 1965 Chevrolet Corvette including production numbers, performance specs, factory colors, and OEM brochures. Also, check out additional model years or view other Makes and Models in our Research center.