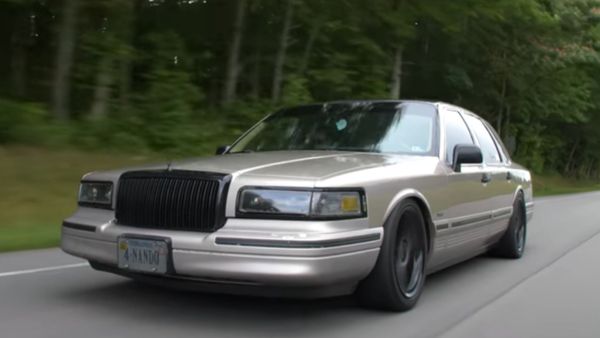 Is this the best worst car or the worst best car or something else?

When you’re sane and looking for a good project car, the whole idea is to find a good jumping-off-point with tons of potential. For example, choosing a car which can handle a lot of power and that has many different aftermarket parts available isn’t a bad idea. That’s the exact opposite of what this guy did by choosing to modify a Lincoln Town Car.

Everyone’s going to have an opinion on this build and they’re all probably going to be pretty strong. Yes, this is a polarizing vehicle, but the story is this was the owner’s first car and he obviously fell in love with the thing. That’s no uncommon and a lot of gearheads start by tinkering around with their first ride, but they eventually cut their losses and upgrade to something better later.

Some people will think this guy has wasted a lot of time and money on this Lincoln. After all, he swapped out the automatic transmission and installed a Tremec T56 Magnum to make it more performance-oriented. He’s also put on coilovers, done serious work on the interior, installed a performance cam, and made quite a few other tweaks. Even with all those modifications, this is still a land yacht.

You have to wonder if this guy put the same amount of time, money, and effort into something like a Ford Mustang what kind of a performance return he would have on his hands. If you ask us, he likes to be weird and different, so a Mustang probably isn’t all that appealing. To each his own, we guess.

As you’re about to learn in the video, This modified Lincoln Town Car isn’t just used for cruising or some questionable street racing. No, the owner races it on oval tracks. Would you have the guts to even try something like that? Do you think this guy is a genius or an idiot? Check out the video before drawing a final conclusion.