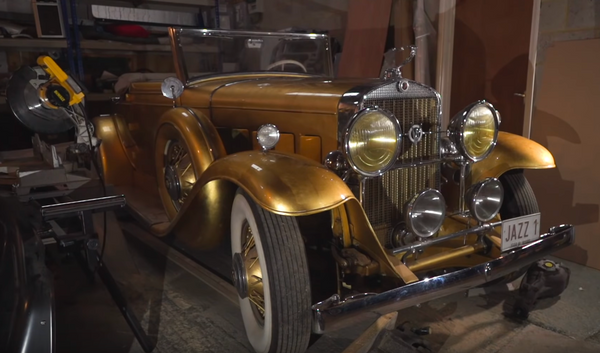 This collection is one of the most valuable and diverse assemblages of cars in the world.

In a warehouse somewhere in the UK lies a stash of some of the rarest and most valuable cars there are. Some of the cars featured here include a BMW M5 Touring Wagon, 1972 Corvette, Austin Healey 3000, and many more vintage cars.

Want to see a collection with a Cuda, Challenger, Road Runner, and more? See it here.

The aforementioned BMW M5 Wagon is widely regarded as one of the most coveted M cars ever sold. Never being sold in the US, this M5 Wagon is equipped with a 5-speed transmission and the odometer only reads 100,000 miles. It becomes apparent upon inspection that this car was very well taken care of. One other thing worth pointing out is the fact that this was the 3rd car off of the production line. The car is also finished in an ultra-rare aubergine color, which commands high praise due to the rarity and status of this car.

Another piece to this mostly European collection is an almost track-ready 1972 Corvette. This fresh breath of American air is sporting a Chevy small-block V8 mated to a 4-speed transmission. The factory-wide arches allow for larger Hoosier racing tires. Handling is controlled by a positrac rear axle, this allows for this Corvette to hold onto the track and take the turns like a pro. These cars are ultra-rare in England due to the stigma around the limited access to parts. However, the owner says that this is a relatively simple car to work on and race. Another rare vehicle on this list is the Healey 3000 produced by the Austin Healey which is one of the more 'classic' European cars on this list. This left-hand drive masterpiece was bought for £37,000 originally and has risen in value exponentially since.

Accompanying the other cars in the warehouse is one that makes all others seem like lesser machines in comparison. The legend of the 'Lost Cadillac' can be traced back for decades, originally fabled as having been built by a billionaire and then found its way into the hands of Liberace himself. The car completely disappeared sometime in the 1970s after having been sold to a museum in Germany and hasn't been seen since. Apparently, upon seeing this car the owner knew he had to have it and realize its value upon hearing the story.

Upon inspection of the engine bay, one finds the drivetrain of this 1931 Cadillac being powered by a V8. Although a V8 in a production car at the time was quite a feat, this was the cheaper engine option as the more expensive trims came with a V12. When entering this vehicle one is presented with an immaculate white leather interior and a Mink carpet. The steering is difficult due to the lack of power steering however it still runs and drives well despite 90 years of life.

A bronze Maserati Merak with a plaid interior is quickly overlooked in favor of a beautiful K-code Mustang. Naturally, Being a K-code, the Mustang came equipped with the Hypo 289 engine pushing out 271 horsepower. The car also sported stiffer valve springs, different heads(different from standard), a Zinc block, and a 4-barrel carburetor. Moving on, we find an Acura NSX in good condition and low mileage. The pièce de résistance seems to be one 1967 or 1968 Mercury Cougar with a 3-speed manual transmission coated in white paint and that concludes the trip to the warehouse.

Hoping over now to Bernie's house, we find ourselves confronted with a captivating black Corvette. This is the chosen car of the owner's sons who race the vehicle from time to time. In the late ’70s, this 1956 Corvette was purchased from a friend who said it used to drag race down in Florida. It came with a supercharged big-block V8 and massive drag tires, however, the owner couldn't afford the car as is so he got a deal. For a lesser price, he could purchase the car without the engine or transmission so he did. He spent the next 9-months building the car for circuit racing. With all-4 four-wheel disc brakes, coil-overs, and a Ford 9-inch rear end the car handles like a dream and has become somewhat of a legend around the race track. The car now has a V8 pushing an impressive 465-horsepower and is an absolute surprise to everyone at the circuit.

The son and father have spent some time restoring a classic Mini Cooper as well. He also has a Mazda Cosmo which has many design aspects of American cars of the time despite the Japanese heritage, it was restored in Russia and is in such good condition that there may only be a few left in such a state in the world. Only 343 examples of this car were built between 1967 through 1968. An interesting piece of this car collector’s puzzle is his James Bond type Austin-Martin DB5, which he hand restored himself. Second, to last on our list are one Porsche 993 GT2 which made a trip around Daytona at 183mph and the final lap on our journey brings us to a close with a Porsche 964 RS. Needless to say, this man’s car collection is extremely impressive, and not only but there is more to come in the future.