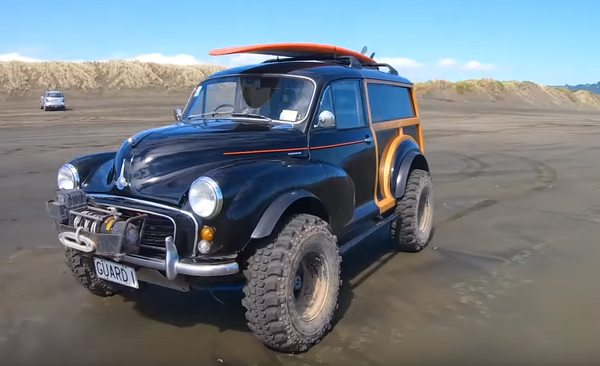 Learn about a Morris Minor that gets a heck of a makeover!

Hang onto your bull bars and fender flares, this Morris Minor is one of the wildest builds we’ve seen. With the rising popularity of restomods and people wanting to push the envelope between old and new as far as possible, there has been a few “body swap” over the years. We’ve seen everything from the shell of a classic Mustang sitting on an S550 chassis to classic truck bodies being bolted up to a newer model’s underpinnings, though these types of projects are probably thought of a lot more than they are actually attempted.

For what it’s worth, all of the examples that come to mind have been somewhat successful at both creating a functional vehicle and pointing out how much work is involved in this type of project. That being said, we really thought we had seen the last of the body swap. At least the more extreme ones anyway. But that was before Barcroft Cars introduced us to Shane Armitage who was featured on the Ridiculous Rides YouTube channel.

The New Zealand native’s affection for the big American “Woodies” and off-roading both drove him to undertake an extreme build project crossing a Morris Minor Traveler with a 4X4 Suzuki Vitara. He already had the Suzuki when he found the British Motor Corporation classic car body.

Modifying the body to fit the chassis and give that old “Woodie” look required a massive amount of carbon fiber work but the end result is something truly unique. For Shane, this is the perfect 2-in-1 vehicle. It gets him from home to work and back everyday and he can hit the trail or local mud hole on the way to the grocery store. Who knew a Suzuki Vitara could be so capable and a Morris Minor could look so good. We are definitely impressed.