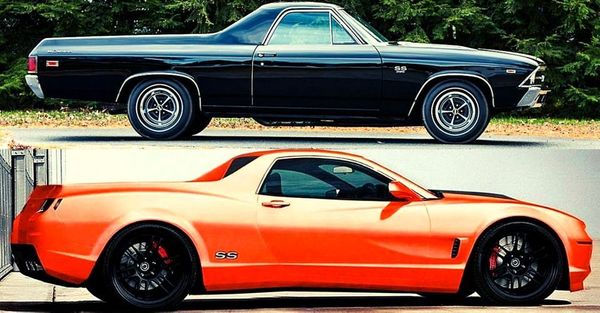 Business up front. Party out back.

Chevrolet has been around for 108 years, and during that time the American automaker has hit some home runs in regards to vehicle design, while others tend to lean more on the interesting side. The El Camino may fall into the latter for most, although the car does have its very own cult following. A vehicle for the indecisive as it looks like a car but has a bed as a part of the body. You know, just in case you need to haul some furniture for your mother-in-law.

General Motors debuted the El Camino for the 1959 model year and built it on a station wagon platform with an obvious inspiration from the Ford Ranchero. Chevy's take on the mash-up was eventually discontinued due to declining sales, but it reappeared again in 1964, but this time it was built on the Chevelle platform. A larger success rate than its kin, the El Camino stuck around until 1987.

The Chevy El Camino was one of those cars that was either loathed or loved. It was hard to wrap your head around a car with a pick-up bed molded into the body, but as mentioned above, the vehicle developed a cult following. Today, these vintage utility cars can fetch a pretty penny at auction, especially one in well-kept shape. While there hasn't been any plans to bring back the mullet car, a renderings have surfaced of what a modern El Camino might look like.

The 1987 model year was the last of the El Camino in regards to production, but General Motors has made a few attempts to bring it back. Back in 1992, an El Camino concept car was unveiled based on the Lumina Z34, but it never made it further than that. The idea was brought back to life in 1995 with the El Camino possibly sharing the Chevrolet Caprice station wagon platform, but the B-body platform was discontinued in 1996 so that idea was scratched. At the New York International Auto Show in 2008, Pontiac actually unveiled a utility-like car, but budget cuts made that idea disappear as well.

Modern cars evolved from classic kin usually have design cues that resemble the cars of the '60s and '70s, much like the Chevy Camaro. Sure, the modern Camaro is its own animal, but it does have features that resemble that old-school muscle car, even if faintly.

So, if there was a modern El Camino in the works, what platform would it share? According to HotCars.com, the best bet would be the Malibu. After the Chevelle was discontinued in 1977, the Malibu kept trucking on in the mid-sized market.

It's not likely that the El Camino will make a big comeback, but stranger things have happened. Now, all the rage is these modern crossover SUVs that have tons of storage space and can tow the family boat to the lake. It doesn't look like the El Camino really has a place in the modern car lineup, especially with the Ford trucks being as fuel-efficient as they are and with an insane tow rating. Plus, the car would appeal to just a small group. We could be wrong, but it looks like the El Camino breathed its last factory breath back in 1987.