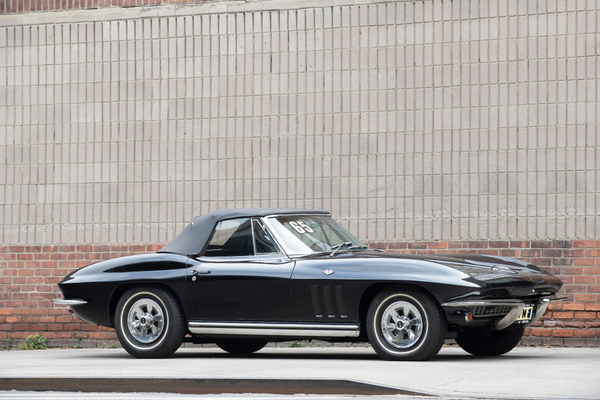 One of the 36 Corvettes found in various parking garages around New York City, and it can be yours.

Some may recall the incredible "barn find" in New York City involving 36 Chevrolet Corvettes, each of a different model year ranging from 1953 to 1989. A highly desired classic, this 1965 Chevrolet Corvette Sting Ray that was among the recovered cars from the Peter Max Collection. The plan was to use these Corvettes as canvases for a series of paintings, but the project was never started. Covered in decades of dust, these cars have been sitting in various parking garages since 1989. Thanks to Corvette Heroes, all of these Corvettes are in the process of being restore and brought back to former glory. Here's your chance to take home this incredible classic Sting Ray through Corvette Heroes. Click here to use the Promo Code for additional bonus entries. Tickets are just $3 each with deals available proceeds benefiting American military veterans through the National Guard Educational Foundation.

The '65 model marks the third year of the second-generation Corvette. A few minor cosmetic changes were made from following year, but plenty of upgrades were given to the Sting Ray when it came to performance including larger powerplants and an all-new braking system.

Stuffed inside the engine bay of the '65 Corvette was an all-new monster 396-cubic-inch big-block V8 engine dubbed the "Mark IV Engine" that came equipped with an 11:1 compression, impact-extruded alloy pistons, solid lifters, a larger carburetor, and a double-snorkel air cleaner. The production '65 Corvette was Chevrolet's chosen car to be powered by the new Mark IV big-block.

After the introduction of the new V8 engine, Corvette enthusiasts were swarming local dealerships to get their hands on one. The '65 Vette stuffed with the 396ci V8 could reach a top speed of 140 miles per hour and could conquer the quarter-mile in about 14 seconds at 104 mph. The '65 Corvette Sting Ray was a huge hit selling 23,564 units that made it one of the most successful years of the Corvette at the time.

For the '65 model year, the standard engine was the 327-cubic-inch V8 with an output of 250-horsepower, and other options included a 300-hp version, a new L79 small-block engine that generated 350-hp, a 365-hp engine, and a Ramjet Fuel Injection engine with a pavement-stomping 375-horsepower. The standard transmission was a 3-speed manual, but a Powerglide automatic or floor-mounted 4-speed manual were also available.

Here's your chance to take home this incredible and restored 1965 Chevrolet Corvette Sting Ray through Corvette Heroes. Click here to use the Promo Code for additional bonus entries. Tickets are just $3 each with deals available proceeds benefiting American military veterans through the National Guard Educational Foundation.