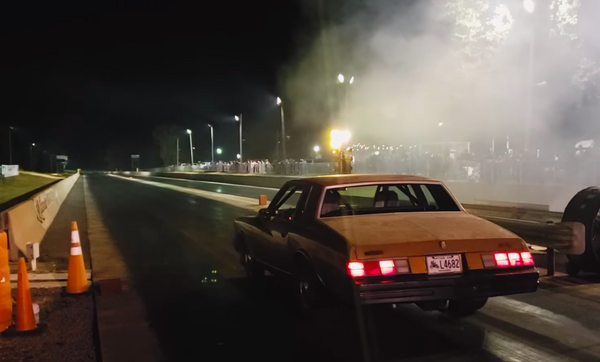 This Chevy now dominates the track!

In hopes of building a decent daily driver, Nick acquired his 1980 Monte Carlo from a trade. Although, once he actually sat down to plan yanking the tired 6-cylinder out, the build ideas quickly got out of control - undoubtedly going through many brake pads and brake rotors to get there. The result is an estimated 900-rear-wheel-horsepower beast that is capable of completing the 1/8th-mile in under 6-seconds while still being able to be driven on the street. Based solely on this TRC video on YouTube, the car is unlikely to be correctly called a street car though.

If you were to overlook the 17x4 front and 15x10 rear S71 Weld Wheels wrapped in Mickey Thompson tires, ignore the side exit exhaust, and judge a book by its cover, you might not see anything special about this car. It is one of the less popular body styles in a fading color that didn’t look all that great new and the stock engine was one of the less powerful GM engines of the time. However, open the hood and it is easy to see that this is no ordinary G-Body.

In his home shop using a tubing bender and skills that he learned for this project, Nick built a 12-point roll cage and relocated the radiator mount, making room for the new drivetrain. He then replaced the stock engine with a 5.7-liter LS-based engine. Keeping the iron block’s stock bottom-end, he rebuilt the valve train with a BTR twin-turbo camshaft and the pushrods and valve springs to accommodate it. Using expertise he gained from his career as a diesel mechanic, TIG welding skills that he did know he had at the time, and a few components from CX Racing, Nick then incorporated two junkyard sourced series-60 Detroit GT42 turbo into the build. With an ice-water reservoir and an air compressor to control the boost pressure in the trunk, an intercooler under the hood, and a Boost Leash boost controller in the cab, the Monte Carlo has seen boost levels as high as 19-PSI.

His first run in the 1/8th mile resulted in a 6.17-second run. However, after some adjustments the 1/8th mile was whittled down to just 5.627 at 123.52-mph. For Nick, though, the fun of this Monte Carlo is not limited to trans-brake controlled launches from a dig, as he commonly drives the car on the street. As you can see from the video, the car is a force to be reckoned with, even from a roll.