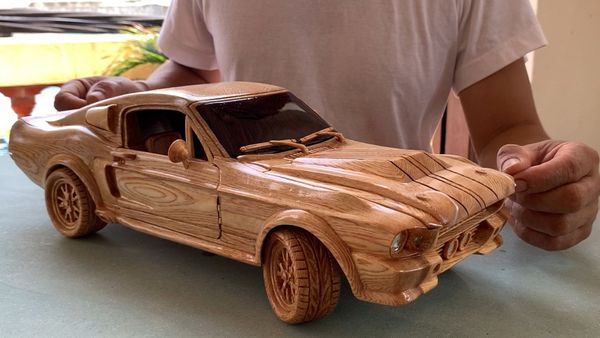 Maybe this could be your next project car…

When you’re a gearhead you’re often into all kinds of cars, from diecast models to cars made of wood. That’s what makes watching this woodworker craft a 1967 Shelby GT500, one of the most iconic classic muscle cars, so fascinating. It’s obviously a sped-up version of the work, but it sure gives you a taste of what creating a little car out of wood involves.

You’ll notice in the video this guy is doing the work without shoes or socks on. He actually uses his bare feet to hold the wood down at one point. We don’t recommend doing this. The man is obviously a wood savant and you shouldn’t try to copy his moves completely.

What’s amazing is the level of detail of this wood car. It’s more like a model, because the guy pays attention to things like the door panels, pedals, steering column, and gauges. The tires have tread blocks and voids. He even fashions a two-piece gas door and cap. Most people would make something that kind of resembles a Shelby GT500 and call it good, but this guy goes the extra mile and then some.

Before you think you’re going to whip out one of these cars as a Christmas present or just to put on your desk, keep in mind this guy who’s an expert woodworker says he took 3 weeks to create this Shelby GT500. He’s also using a nice array of tools you might not have, so if you really want to attempt it you’ll need to give yourself plenty of time and really study this video closely. Even then, don’t expect your car to look as good.

The guy who runs Woodworking Art has made all kinds of cars, like a Ford Raptor and a 1959 Cadillac, so he has a lot of practice. He also has a lot of natural talent which is nice to see being used for such a cool creation.