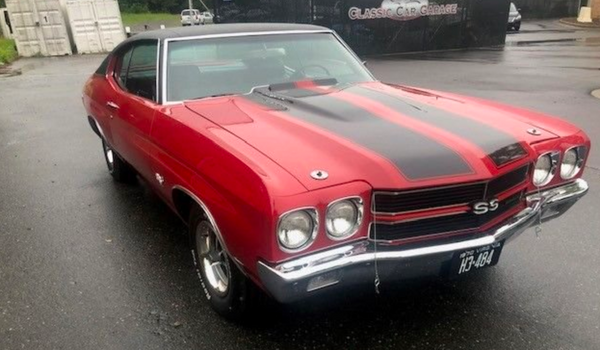 Finding a clean example of a 1970 Chevy Chevelle SS LS6 these days is like finding a unicorn hidden among the horses. There are many variants of the Chevelle that were made during this time, but the LS6-powered ones were highly coveted beasts, that have the meat to keep up with the muscle car madness on the roads today. Example in this kind of condition are becoming harder to find by the day, and as soon as one becomes available for sale, they're usually gone by the next day. During the winter GAA Classic Cars Auction, this LS6 1970 Chevelle SS will up be up for grabs.

Finished in a stunning red with black racing stripes, this iconic muscle car coupe is Jerry MacNeish Certified - this type of certification is often cited as being 'the gold standard' in classic cars.

Powering this potent muscle car is the highly coveted LS6 454-cubic-inch big-block V8 engine fed by a 4-barrel carburetor. Backing the powerful engine is a manual transmission, making it a fun driver's car for someone who has never grown tired of snatching gears.

The '70 Chevelle 454 is one of the first cars that come to mind when thinking of the muscle car era and is more desirable than ever. This big-bodied street machine kicked off a new decade, but it would also be one of the last produced before new emissions regulations put in place that would slowly kill off muscle cars altogether in favor of fuel efficiency.

If one is interested in parking this bad boy inside their garage, check out this beautiful albeit potent 1970 Chevrolet Chevelle SS LS6 being offered through the GAA Classic Cars winter auction, happening November 5th-7th.