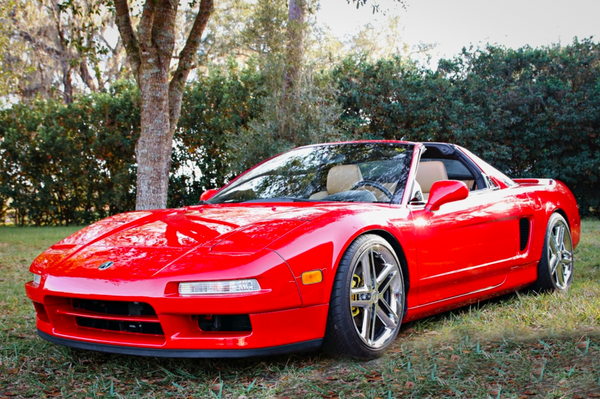 This is a Japanese collector car you need.

The NSX's roots can be traced back to the HP-X concept of 1984, though sales did not begin until 1990. Despite being recognized as one of the world’s most advanced and innovative sports cars of the time by legends such as Gordon Murray, the designer that created the McLaren F1, the first generation was discontinued in 2006. Advanced aerodynamics and the use of lightweight materials attributed to the car's successes and the mid-engine design ensured incredible balance leading many to consider the NSX an 'everyday supercar.' Unfortunately, not a whole lot of NSX cars were sold in the US making these cars pretty rare today.

PcarMarket is offering enthusiasts the chance to own a super low mileage example that has been babied from day one. This 1996 NSX-T was purchased by Chuck Bennett, the founder of Zymol, for the purpose of being a promotional show car. Being unimpressed with the cars performance, Bennett had the 3.0-liter engine converted to RoW specs along with the suspension and exhaust, using genuine OEM parts.

A set of triple chrome coated Bespoke MOMO Arrow wheels were fitted to the car to finish off its sporty look. Flawlessly finished in deep Formula Red over a Biscuit leather interior, the car looks just as good today as it did when it left the factory. In fact, much of the interior is still covered in the original protective plastic film. With only 11,000 miles on this beautifully maintained car, this is as close as it gets to new for a 1996 year model NSX.

Included in the sale are the original books and tools, a collectible hardcover NSX book, 2 car covers, a Speed Lingerie front bra and mirror covers, and a complete Zymol “Concours” detailing kit with a lifetime of complimentary refills. At the time this was published, the high bid was already up to $55,000.

Did you know PCARMARKET now considers all makes and models, not just Porsches. Click here to learn more about consigning your car.