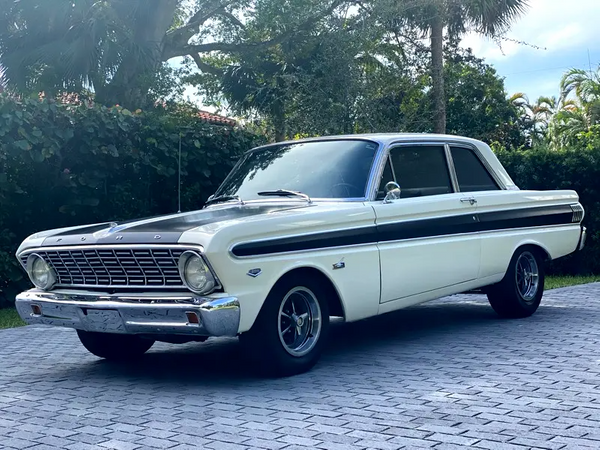 Are you tough enough to tame this bird of prey?

The Ford Falcon is beloved by enthusiasts, but it's not typically thought of as a high performance machine. However, this particular Ford Falcon isn't your average '60s compact car.

The Falcon is usually best known for lending its platform to the Mustang. Apparently, this Falcon owner decided to give his Falcon a little bit of Mustang style.

Apparently, the owner of this car invested over $50,000 into restoring and modifying this classic American car. The result is a fast, lightweight car that could surprise many muscle cars on the street, and put some major hurt on them in a race.

From the outside, of course, it still looks pretty subtle. Falcons may not look mean or aggressive, but when they're done up like this, they are, at the very least, handsome-looking cars. There's a few hints of this car's performance intentions, of course, if you're paying attention.

There's a slight rake, with wider tires in the back, wrapped around a set of Magnum 500s. The black trim also lends a more muscular look to this Falcon.

The interior looks pretty standard, with the exception of some additional gauges. Falcons aren't really they most luxurious cars inside – they were never meant to be. Besides, all of that extra stuffing would just add more weight, anyways.

Like any performance car, the real story is what's under the hood. That's where you'll find a built 302, fed by a high-rise aluminum intake with a four barrel carb perched on top.

It's backed up by a four-speed manual transmission. Some prefer their muscle cars with automatics, while other have no preference. We think it's more fun to shift your own gears.

If this Falcon strikes your fancy, you can find it at Awesome Joe Auctions, located in Delray Beach, Florida. Register to bid now!