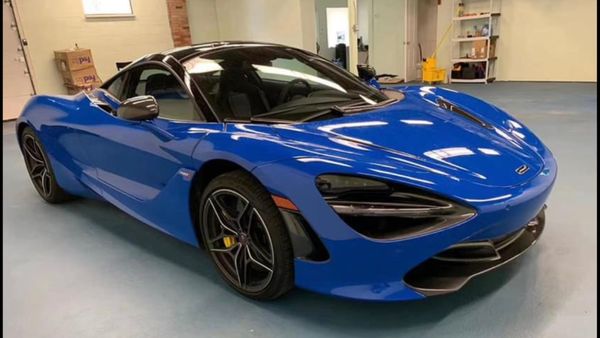 This Super Series car could be in your garage…

Even among the impressive lineup of cars to have emerged from McLaren, this 2018 McLaren 720S is a standout. Part of the Super Series, it was designed to be lighter, more powerful, faster, and better than its predecessors. Now this pinnacle of supercars is open for bids on Awesome Joe Auctions, meaning you have a shot of garaging this beauty.

And what an amazing-looking vehicle it is. This 720S is bathed in a dark blue which flaunts that curvaceous body designed for optimal aerodynamics and high-speed handling on a track. In fact, McLaren designers used the Great White Shark as a design inspiration for this supercar, which is why it has such a predatory vibe.

There are other amazing design qualities of the McLaren 720S, most notably the iconic doors. The twin-hinged dihedral doors open forward and up at the same time, making your arrivals and departures appropriately dramatic.

It’s no wonder the paint and all the black trim pieces have a deep luster, since this supercar has been sparingly driven a mere 4,000 miles. Not only does the exterior look perfect, the black interior with Alcantara trim shows zero flaws in the pictures.

Of course, the main draw of any supercar is the ultra-impressive performance, something this McLaren excels at. A twin-turbo 4.0-liter V8 puts on tap 710-bhp and 568 lb.-ft. of torque. All the power in the world does no good without an advanced transmission, so it’s great this supercar comes with a 7-speed dual-clutch automatic for rapid, precise gear changes. In fact, with this setup the 720S does 0-62 mph in just 2.9 seconds and 0-124 in 7.8 seconds, making other cars look like they’re standing still.