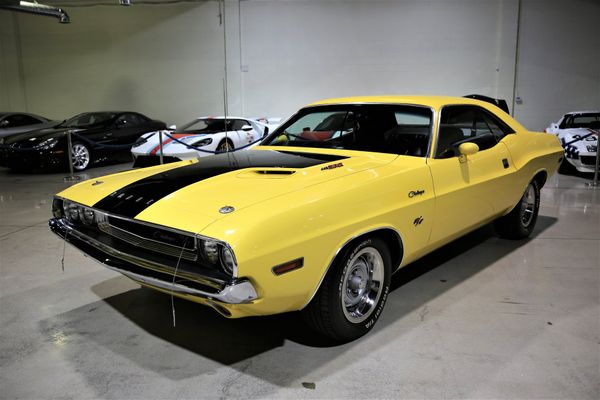 This low-mileage Mopar muscle car will leave jaws dropping as it's challenging the competition!

Introduced late in the pony car game, the Dodge Challenger was not so much about being revolutionary, although it was, but more about making the absolute best pony car. The two series, available in three different models, were fitted with nearly every Mopar engine available. From a 225 cubic-inch Straight-6 all the way up to the legendary 426 cubic-inch 7.0-liter Hemi rated at 425-horsepower, with the 390-hp 440 cubic-inch 7.2-liter Six-Pack being the largest displacement and one of the more bragged about performance options.

While this stunning fully rotisserie restored 1970 Challenger R/T, available through Fusion Luxury Motors, originally came with a 335-horsepower 383 cubic-inch engine, one of the smaller of the performance engine options, it has been fitted with a strong 440 Six-Pack. With comfort and style in mind, the interior is a well put together balance of wood grain, chrome, and black leather. Checking off the final box in the epic muscle car checklist, the low 17,673 miles on the clock are believed to be the original ones.

At a bargain price of only $59,950, the car comes with a binder full of receipts and photos from the extensive restoration. A complete breakdown of its history is featured in said binder, highlighting the 1970 R/T Challenger’s history, including that it was made in Los Angeles, California.

The fully documented restoration took place in 2008 and the 1970 Dodge Challenger R/T has been featured as a showcase piece at Summit Racing's headquarters, pictures of which can also be seen in the binder. Fully restored to show quality, strong large displacement powerhouse with an epic name plate, comfortable and stylish interior, and impeccably documented at bargain - what more could anyone want in a 1970 Challenger R/T?