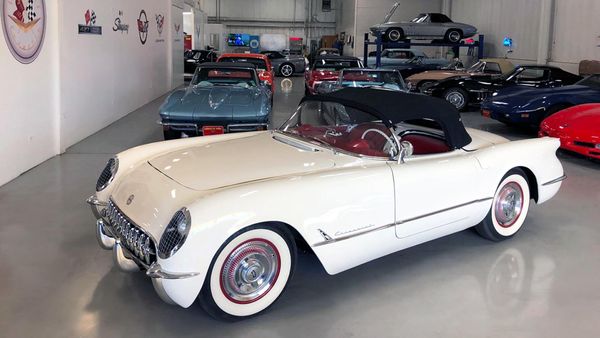 This was just the 67th Corvette ever made!

Since its introduction 67 years ago, there have been many styles and versions of the legendary Chevrolet Corvette, but none are as striking as the original 1953 model year. There's just something breathtaking about these first-year C1s, and while all of these '53 Vettes looked the same (Polo White paint, red interior and a black soft top), this freshly restored 1953 Chevrolet Corvette being sold through Corvette Mike Midwest is a flawless example.

In 2019, this car was a recipient of the MCACN Concours award, but then it underwent a meticulous restoration that was concluded in March 2020, which in all likelihood makes this the nicest 1953 you'll find. The restoration was completed by a shop that focuses on C1 Corvettes using as many original parts as possible. Even details such as fasteners are period correct to make sure this Corvette remains as stock as it was back in 1953, this 'Vette is basically brand new!

The overall quality of this restoration isn't the only thing that makes this 1953 Chevrolet Corvette so desirable. The iconic Blue Flame engine is numbers matching, and this Corvette is fully documented back to 1982. Before that, the ad says that this Corvette had been off the road since 1961.

Built in extremely limited numbers, prices for the 1953 Corvettes aren't getting any lower, and this highly detailed and numbers-matching restoration is likely one of the best examples you'll find for sale. This Corvette would make the perfect addition to any classic car collection, but it's going to take $244,990 to get this C1 parked in your garage. If you're looking for a turn-key show-winning Corvette, contact Corvette Mike Midwest for more information on this immaculate '53 'Vette.