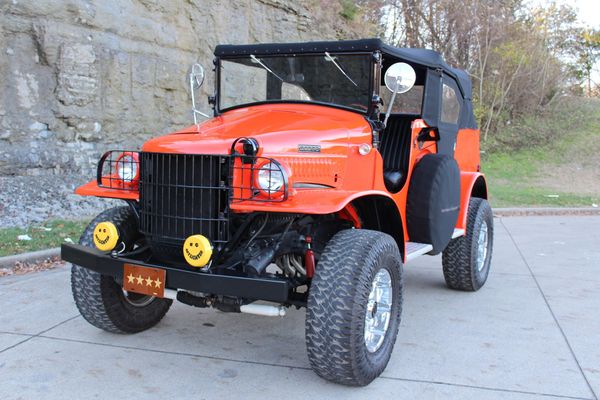 This is one of the most unique classics out there.

There are an infinite number of custom classic builds out there, but we can't think of one that has as much attitude and know-how as this 1941 Dodge Command. The Command Car was part of Dodge's WC military vehicle lineup that pre-dated the Dodge Power Wagon, and this example, being auctioned off by Cord & Kruise, combines the truck's vintage looks with a modern chassis and powertrain, making it one of the most unique restomod trucks you'll find.

This vintage Dodge is offered through Cord & Kruise, and you can bid now, with only two days left on the auction!

The Dodge WC Command Car was a versatile vehicle used in World War II and later. To meet the needs of the military, this truck was built in a wide variety of body styles, and this four-door body might be the coolest of them all with its rounded door openings, two rows of seating and a removable top and doors. Those huge, flat fenders are easy to see the resemblance to the Power Wagon, which went into production after the war.

Although this Command Car may have started out as a U.S. Army grunt, today it has been fully restored wearing a bright orange paint job to ensure this truck will spark conversation wherever it goes, and the new soft top and doors are a guarantee you'll get noticed even more.

Under that vintage military body is a three-quarter-ton Chevrolet truck chassis powered by a Chevy Big Block 454 cubic-inch V8, and if this truck was big and bold enough, this one has been lifted and rides on huge 37 x 12.50-inch tires. This modern chassis comes with conveniences such as power steering and power brakes, and it also has cool details like a hidden stereo system and hand grenade accents throughout the cabin. The digital odometer shows this truck has been driven just 1,745 miles since it was built, and the overall condition backs up mileage reading. Whether you're heading to a car show or off-road getaway, this 1941 Dodge WC Command Car is literally ready for anything.

This vintage Dodge is offered through Cord & Kruise, and you can bid now, with only two days left on the auction!