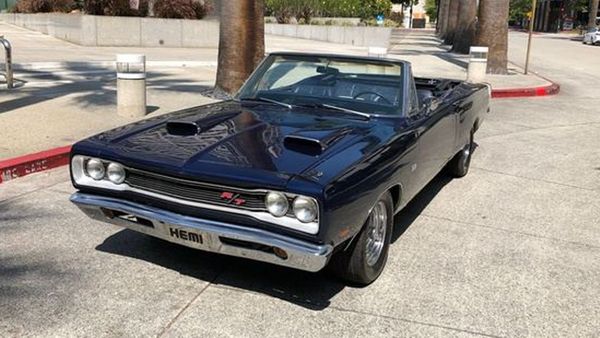 Most restomods are obvious... not this one.

As cool as restomods are, some classic car purists can take issue with customizing such a car with modern components. Even if you're in this group, it's hard to find any fault with this semi-custom 1969 Dodge Coronet R/T convertible that is being auctioned off at the Leake Virtual Live Auction.

Parked at the curb, this 1969 Dodge Coronet looks factory fresh with a clean body painted in dark blue with a rear stripe. Even the interior is mostly stock with two-tone bucket seats and the factory three-spoke steering wheel, but it does have an aftermarket shifter that hints at the powertrain upgrades this clean car hides.

Pop the hood and you'll see what makes this particular Coronet so special. While it isn't clear which Mopar engine this 1969 Dodge Coronet was originally fitted with, today it's powered by a modern 5.7-liter fuel-injected Hemi V8. This engine has been used in a variety of applications since it was introduced in 2003, and its lower power output has this engine rated at 340 hp (since it's not known what vehicle this engine came from). Aside from the added power, this engine also benefits from having a modern air conditioning system ensuring this Coronet will be a cool cruiser with the top up or down, and this car is also equipped with power brakes, front disc brakes and power steering.

This 1969 Dodge Coronet retomod will be up for grabs through Leake Auctions as a part of a 44-car online-only auction on September 14th . For your shot at owning this Hemi-swapped Mopar or any of the other classic and collectible cars that will be crossing the auction block, be sure you're registered to bid.