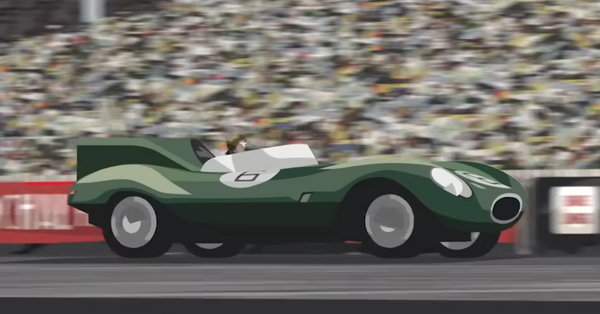 It’s a tragedy every motorsports fan should remember.

There are too few good animated movies about cars. Sure, we have Pixar’s Cars movies and there used to be Transformers and Speed Racer, but these days there aren’t many around. If you haven’t seen the short film below by Q. Baillieux about the deadly accident at the 1955 24 Hours of Le Mans, it’s a rare gem. Not only is it a good animated movie involving car culture, it treats a tragedy with artful dignity.

As they say, those who don’t remember history are doomed to live the same mistakes. While the deadly crash in France might be painful to remember, it’s better that we do and learn from what happened as well as why. Certainly, nobody wants another 80-plus people dying because a race car lands in the spectator stands at a track.

Wrapped into the story of tragedy is also one of dedication and pain. After all, endurance racing isn’t for the weak-willed, but at the same time when a team member is killed you can’t look the other way, and that duality really comes through in this film. Even with a horrific crash and so many lives lost the race continued when they easily could have called it off, although Mercedes-Benz pulled out.

Today the decision to not cancel the competition right then would likely get savaged on Twitter or other social media sites by the armchair admirals who seem to take up residence on such platforms. Yes, there was criticism of that decision back then, but no considerable efforts were made to all-out cancel the 24 Hours of Le Mans as a result.

You can argue about the best ways to memorialize Mercedes-Benz driver Pierre Levegh, but continuing to race could and was viewed as one option. After all, the man was a race car driver and knew going into the competition what kind of risks he was assuming, yet he still strapped on his helmet and pushed that car to its limits. With 22 hours of the race left, the decision was made by some to carry on.

Incidentally, the tragedy did cause some people to not continue. Mercedes-Benz ended its motorsports programs at the end of the 1955 season, not returning until 1988. Switzerland banned circuit racing until 2007. Meanwhile, officials in France decided to increase the distance between spectators and the track to help prevent another tragedy.