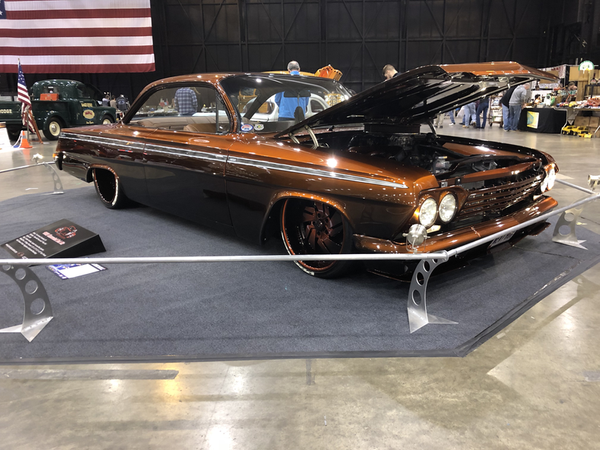 Say the words "Chevrolet Bel Air," and most folks think of the iconic 1957 model. However, the early Sixties models, in all of their bubble-topped goodness, have a devoted following as well with a diverse range of enthusiasts.

Fans of factory-original restored classics, street rods, lowriders, and donks can't agree on much, but they can almost universally agree on the '59 to '62 Chevy. After looking at this one, you can count us in that crowd, too.

This heavily customized Bel Air makes a big statement, but there's a smooth subtlety about it, too. That unique golden brown color must have something to do with it.

According to the auction listing, that color is House of Kolor Root Beer over a Tangerine base. That orange basecoat brightens up the brown without washing it out. It's a deep, rich color unlike anything we've ever seen before.

The lasting also states that this car was built by Pro Comp Customs, the company responsible for finishing many of the cars used in The Fast and the Furious movies. This car definitely has that look to it – it wouldn't look out of place with Vin Diesel behind the wheel.

This classic Bel Air isn't only about looks – there's serious power under the hood, too, in the form of the legendary 409 cubic inch big block V8. The mighty 409 breathes through a custom exhaust with electric cutouts, and shifting is handled by a built Turbo 350 transmission.

If you want to make this one yours, it's being offered by Premier Auction Group of Punta Gorda, Florida. One this is for sure – you won't find another like this one.