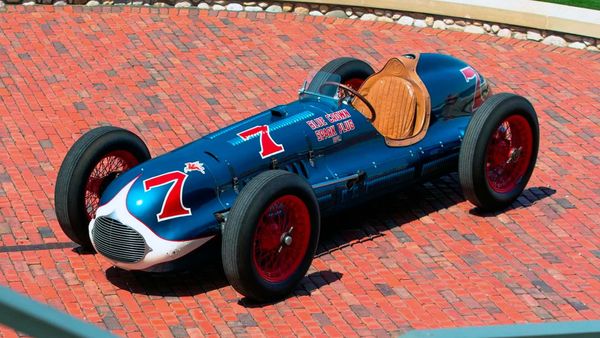 Bill Holland and his no. 7 racecar did quite well at Indy in the late '40s.

A vintage racecar makes a great addition to any car collection, but owning a racer that won the prestigious Indianapolis 500 is a rare opportunity. That's exactly what will be up for grabs, though, when Bill Holland's no. 7 Blue Crown Spark Plug Special crosses the block at Mecum's upcoming Indy 2020 auction event.

With Holland behind the wheel, this 1947 Deidt-Offenhauser racecar placed second at the 1947 Indy 500, which was his rookie racing season. His success at the track continued with second-place finishes in 1948 and 1950, and he won the race in 1949. In that race, he led 149 of the 200 total laps, and with this level of success, Mecum says that the Blue Crown enjoyed "the most successful runs in the history of motorsports." Holland's trip down victory lane was captured in this video.

Despite being more than 70 years old, this car shows incredibly well with its vibrant blue paint, bright red wheels and a tan interior. On looks alone, this racer is ready to win awards, but the listing also says that the Deidt chassis and 270 cubic-inch Offenhauser "Offy" inline-four engine are still in running condition. The front-wheel drive racecar would be perfect for any concours d'elegance or vintage car race.

Mecum's Indy 2020 auction runs from July 10-18, and Holland's race-winning Indy car will be up for grabs on Saturday, July 11. If you want a chance at owning an Indianapolis 500 racer with race-winning provenance, be sure you're registered to bid for a chance at this one. The listing doesn't indicate how much the Blue Crown Spark Plug Special is expected to sell for, but it is sure to be a hefty sum as this car represents the pinnacle of vintage racecar collecting.