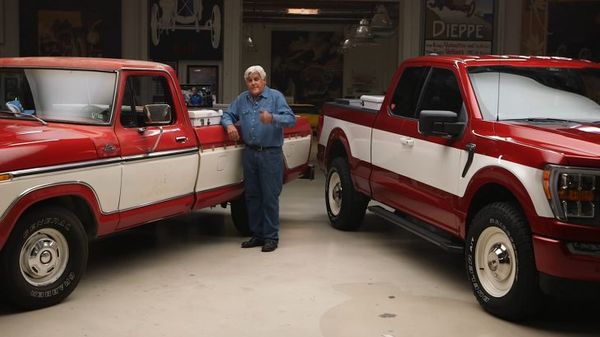 If you don't know the name Sam Walton, you should. Walton's story is an inspiration to millions of Americans, and it's the classic rags to riches story.

As a child growing up during the Great Depression, he worked hard performing odd jobs to help keep his family afloat. As an adult, he would go on to start the retail giant Wal-Mart, at one point becoming the richest man in America in the process.

Despite his tremendous business success, he never forgot his rural roots. Well after becoming a multimillionaire, he continued to drive the same red and white 1979 Ford F-150 that had served him well for years.

This YouTube video shows Jay Leno and Wal-Mart teaming up to build a modern version of Walton's truck. the original is on display at the Walmart Heritage Museum in Bentonville, Arkansas.

Retro-styled pickup trucks are growing in popularity. We love the classic two-tone paintjob on this new F-150, and the white steel wheels with polished center caps also lend themselves surprisingly well to the modern F-150's overall look. Naturally, they're wrapped with a set of raised white letter tires.

One of the most important modifications to the F-150 was a set of custom dog cages in the pickup bed. Walton loved his dogs, and when he was once asked about why he still drove his beat-up old pickup, he famously quipped, "What am I supposed to haul my dogs around in, a Rolls-Royce?"

The collaboration is meant to commemorate the upcoming release of Jay Leno's line of car care products, which will be sold through Wal-Mart stores across America. We can't wait to try them out on our fleet!