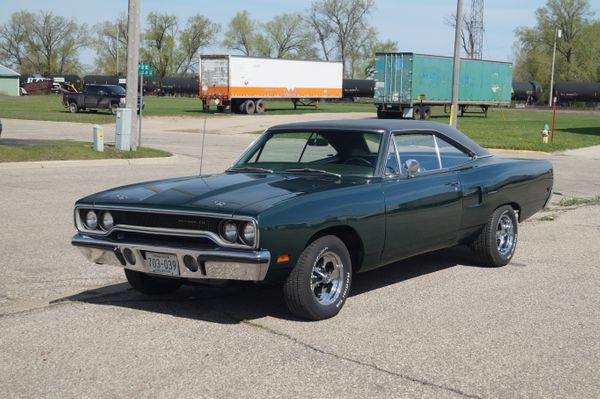 An American muscle car that was once the inexpensive option but is now a highly desired and collectible piece of history.

In the late 1960s, the Plymouth Road Runner made its big debut, and it was the car to have. Not only was it smoking Chevrolet and Ford as one of the fastest muscle cars prowling the streets, but it cost less than those other full-sized muscle cars that were equipped with luxuries and conveniences. Basically, the classic no-frills Road Runner was fast and affordable. Win-win.

Amping things up in the performance department was the highly coveted optional HEMI V8 stuffed inside the engine bay, the same mill that made the Plymouth Hemi 'Cuda incredibly popular.

In the auto industry, the agile Road Runner was considered a pioneer, and it is (arguably) one of the best cars Plymouth ever produced. Chrysler made the car as light as possible and stuffed the muscle car with a potent power plant, a recipe that made it impressively quick.

Based on the Belvedere, the Road Runner was less expensive and weighed less, too. A no-frills muscle car, the vintage Plymouth powerhouse lacked all options including air conditioning, trims, radio, cruise control, and even carpeting. The car was all pure, raw power.

Because the car was so inexpensive and powerful, it was popular with moonshiners of the era as it could outrun police. Whether being fast was a necessity or a preference, the Road Runner was the perfect choice all around. Who needs options and creature comforts when you can have raw, unbridled horsepower?

Meep, meep! That's the sound the Road Runner's horn made that was used by a certain cartoon bird as he sped off after outsmarting and putting a hurtin' on Wiley E. Coyote. Even more, the cartoon bird was also the logo for the muscle car after the automaker paid Warner Brothers a total of $50,000 to use the rights, according to Top Speed. The cartoon Road Runner was appropriate considering that the car also sped off leaving other muscle cars waiting in its dust.

Of all Plymouth Road Runners, the 1970 model year reigned king in regards to performance. Stuffed in the engine bay was a 440-cubic-inch (6.2-liter) V8 engine equipped with 440 camshaft, heads, and intake manifold. With this setup, the car pumped out 335-horsepower. The 440ci topped with a four-barrel churned out 375-horsepower and the six-pack car generated 385-hp, respectively. Last but certainly not least was the 7.0-liter HEMI V8 officially rated at 425-horsepower.

Forcing cold air directly to the engine was the functional Air Grabber hood, and it was operated thanks to a lever inside the cabin. This would turn off when the car was was shut down to keep the engine free of dust and everything else.

For the 1970 model year, a new bird barged into town - the all-new 1970 Plymouth Road Runner Superbird. Given an ultra-aerodynamic body shape, this new bird had a factory top speed of 150 mph. With a few changes, the car could launch to a top speed of 180 mph. Chrysler set a record with the car when they rocketed the car to 200 miles per hour. The rumor is that the Superbird was created mainly to lure Richard Petty away from Ford and back behind the wheel of a Plymouth to compete on NASCAR's high oval banks.

So, exactly how much does the 1970 Plymouth Road Runner cost today? The game-changing muscle car is worth every penny.

So, how much is a '70 Plymouth Road Runner actually worth today?

If you find one of these vintage Plymouth muscle cars in "fair" shape today with a little work needed to get it back to former glory, you can still expect to spend $20,000 and $30,000. According to Hagerty, a Road Runner example in pristine shape will likely go for more than $75,000.

A '70 Road Runner equipped with a HEMI V8 engine could go for over $100,000 with ease. Today, collectors are more than willing to throw down a pretty penny for a muscle car that was a complete game-changer for its time.