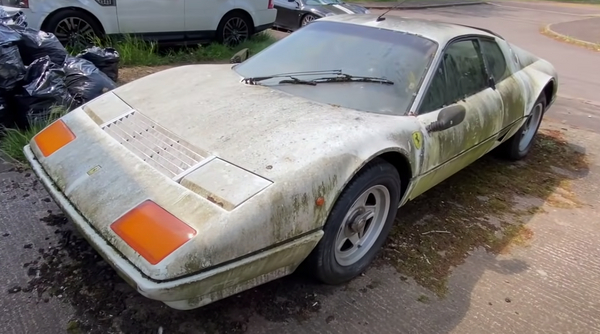 Originally owned by a Saudi prince, this exotic was just parked and left to rot.

The Ferrari 512 BBI was commonly referred to as the Ferrari Boxer due to its flat-12 Boxer-style engine. During its 10-year production run, the car was given three different variations, although they all looked similar in appearance. Initially, the car was introduced in 1973 as the 365 GT4/BB, standing for Berlinetta Boxer, and it was a successor to the Ferrari Daytona. The final iteration was the 512 BBI introduced in 1983 with the "I" indicating that the model was now fuel injected. Out of the 2,300 models produced, only 200 were right-hand-drive. Narrowing that number down even more, only 42 were built as 512 BBI models making the car rare indeed. The Ratarossa YouTube channel stumbled across a rare 1983 Ferrari Boxer, but it's not a pristine example one might envision.

Once at the destination where the '83 512 BBI was waiting, it was obvious that the car had seen much better days. During the walk around, this exotic had moss growing all around and was covered in crud, and even was starting to show some cancerous rust. The car still retains the original interior that is in surprisingly decent shape compared to its exterior. One great thing about the car is that everything is complete. The engine looks cleaner than expected besides a few mossy areas and some cobwebs.

Originally owned by a Saudi prince, the car was in pristine condition less than 15 years ago with photos to prove it. For some reason, this rare Italian exotic was just parked and left to rot until it made its way to this state. Especially sad considering it is just 1 of 42 to exist. To make things even wilder, this ultra-rare Ferrari has just 6,420 miles on the clock and is in this condition.