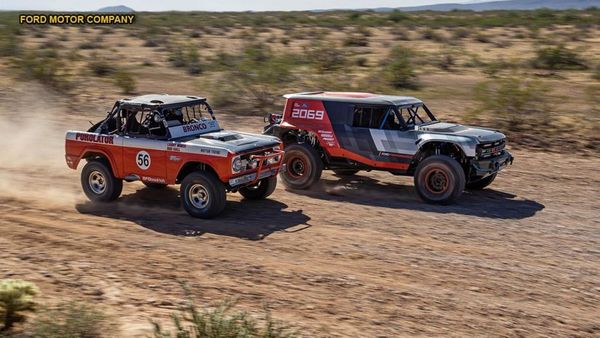 The return of the Ford Bronco is almost here!

Other than a Baja-prepped race truck, the only images we've seen of the 2021 Ford Bronco so far have been highly camouflaged pictures of these off-roaders undergoing testing, but that will all change next month when Ford will finally reveal its Jeep Wrangler rival. According to Automotive News, the Bronco will be unveiled next month with sales commencing next year, while the smaller "baby Bronco" (likely to be called the Bronco Sport) shows its face in April and will be on sale by the end of the year.

After a 25-year hiatus, the Bronco name will return for the 2021 model year, and it will be a traditional body-on-frame SUV that will be available in two- and four-door configurations with a rear-mounted spare tire and removable doors and top, but unlike the Jeep Wrangler, the Bronco's removable components will be stowable in the cargo area. By the time the sixth-gen Bronco launches, Ford also plans on having a full assortment of accessories for dealers to sell.

In April, likely at the 2020 New York Auto Show, Ford will take the wraps off the Bronco Sport. This is a more mainstream crossover based on the Ford Escape chassis, but it will have a boxy, more rugged design to match the Bronco. This version won't have removable body parts, but it is expected to offer a hybrid powertrain.

Even more impressive, the new Bronco and Bronco Sport aren't expected to be niche vehicles. Ford told its dealers that this Bronco family of SUV/CUVs will be aiming at a sales volume that surpasses 200,000 units per year.