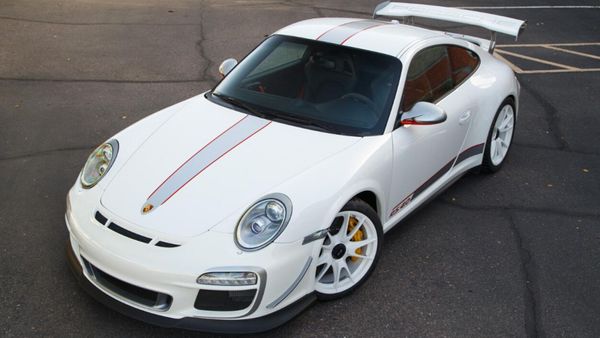 Get ready to place your bid, because this road-legal racecar is racing to a new home.

Of all the Porsches which deserve recognition, this 2011 Porsche GT3 RS 4.0 is one of the best cars the German brand has ever produced. That’s a bold claim but one which many would agree with and for good reasons. Professional drivers have called the Porsche 997 GT3 RS 4.0 a wicked track weapon since it has both explosive power and razor-sharp handling, a combination which is downright lethal. Now this car could be yours because it’s part of the Motorious Spring Classic & Collector Car Online Auction.

Only two very meticulous individuals have owned this Porsche. We can say they were meticulous because the condition of this car is jaw-droppingly pristine. After all, the White exterior looks perfect with consistent paint meter readings all over. Also showing fantastically is the grey stripe with red pinstriping, rocker panel graphics, and the white factory wheels.

Slide inside and you’ll find an excellently-preserved Alcantara interior with all the trimmings looking fantastic. Everything is in the same working condition it was when this car was delivered to its first owner.

If you’re wondering how a two-owner, nine year-old car looks this good, there’s a story behind that. Apparently the first owner was close friends with the second owner, selling the Porsche to him six months after taking delivery of it. There was a mere 800 miles on the odometer at that time, so this vehicle has been absolutely babied.

When Porsche debuted the 2011 911 GT3 RS 4.0 it was like a thunderclap in the automotive world. After all, this was the highest-performance, naturally-aspirated, street-legal car the brand had ever sold in the United States. A mere 600 of these cars were made, and this is number 516, so you’re not exactly going to trip over them anywhere. In fact, this might be the only chance you have to own one and experience this wicked track weapon for yourself.

This car is being sold with service records dating back to when the second owner took possession. Many, many people would be giddy to get behind the wheel of this car, so get ready to bid since. The auction starts April 14 at 9 am EDT, so register your account in advance. If you have questions about the auction process, contact us.

More Porsches For Your Addiction