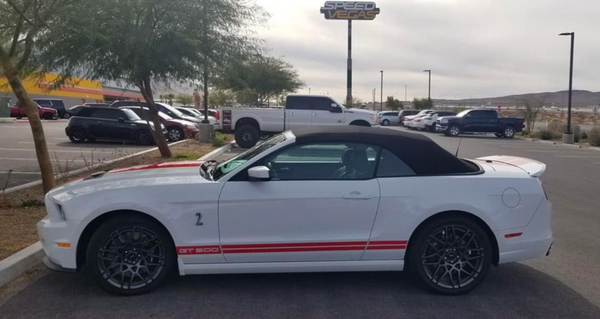 Are you ready to zip off in this pony car?

Ford proved they were armed with a heavy hitter when they produced the highly-coveted Shelby GT500 Mustang. Straight out of the factory gates, this high-performance Mustang was given potent power paired with an attractive - yet aggressive - appearance. You have the chance to take home an instant collectible in the form of a 2014 Shelby GT500, a car that's a fantastic example of the final Shelby Mustangs Carroll Shelby had influence on.

This amazing limited-production Ford Shelby GT500 convertible is a representative of the highest horsepower manual transmission equipped convertible Shelby Mustangs ever made. With 662hp and 631 lbs-ft of torque, superb handling and a 0-60 time below 4.0 seconds, this 2014 Ford Shelby GT500 is one of the world's greatest modern muscle cars.

Produced as a joint venture between Ford and Shelby America, this 2014 Shelby Mustang has 10,500 actual miles, and it exceptionally well maintained. It features a supercharged 5.8-liter 8-cylinder engine mated to a 6-speed manual transmission. Two fuel pumps make sure the blown engine is well fed, and power is funneled through a carbon fiber driveshaft.

The 4-seater 'vert Shelby GT500 for sale is covered in Oxford White with red stripes, and has a black interior with red accents, that includes power everything. Brembo brakes give it the stopping power this beast needs. See it here, for sale for only $52,000. This shelby is owned by our ad director and he can be contacted at randy@speeddigital.com