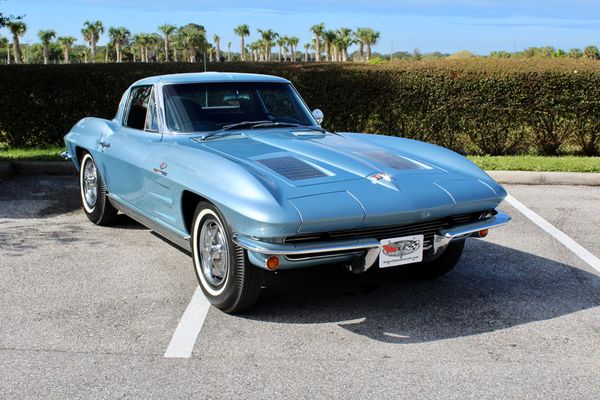 Everyone has wanted a split window Corvette at some point in their lives. Here's your chance to make your dream come true.

The 1963 Corvette coupe was a sensation when it was released. Its hidden headlights, sharp-edged styling, and dramatic "fastback" roofline with a split rear window made it unlike anything else on the road in those days. In the decades sense, it's become an icon of automotive design.

As you probably already know, the split rear window was to become a one-year-only affair, replaced by a wider single window starting in 1964. Total Corvette production for 1963 was well over 21,000, and 10,594 of them were coupes. Each one is in high demand with collectors today.

We found this beautiful Silver Blue example right here on Motorious. It's being offered by Classic Cars of Sarasota for a very reasonable (by split window standards) $139,000.

That gets you a numbers matching 327/360 horsepower fuel injected engine, the best of the best you could get in a Corvette in '63. Naturally, it's backed up by a Borg Warner T-10 four speed manual transmission.

Most of this car is remarkably original, although the ad does state that it has been repainted in its original shade once before. From the photos, the car presents very well overall, and the ad claims that the paint job was "show quality."

This Corvette was recently subjected to a mechanical restoration. Work included a new clutch, brakes, and fluids, as well as fresh bias ply whitewall tires.

This isn't a perfect, 100 point concours car. However, it's in fantastic shape overall. We'd be tempted to leave it just the way it is. After all, you can restore a car as many times as you want, but it's only original once.