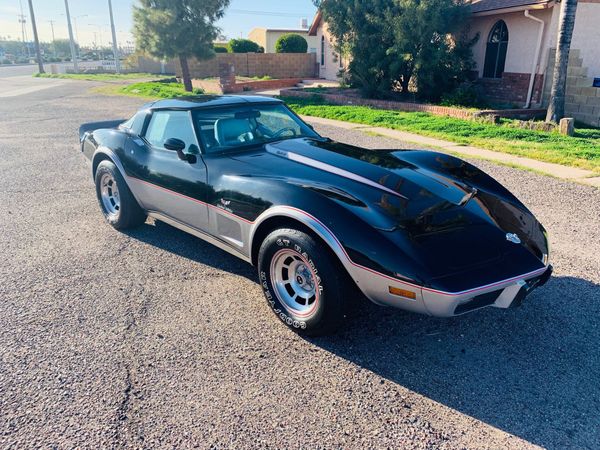 A true time capsule 25th-anniversary C3 that might as well have just rolled off the assembly line.

The 1978 model year marked the 25th anniversary of the Chevrolet Corvette. To celebrate this important milestone, General Motors completely redesigned the body with new fastback styling. With the redesign, the American automaker also debuted a unique Anniversary Edition and a limited-edition replica of its Indy 500 pace car. The Anniversary edition cost an extra $399 for the special two-tone paint job, but it wasn't a limited model by any means with 15,283 sold. However, the pace car replica was limited to just one per Chevrolet dealership which equaled out to 6,502 units, and they were available for an additional $13,000 over the price of the car. Premier Auction Group is offering the chance to bid on this numbers-matching 1978 Chevrolet Corvette 'Anniversary' Coupe Pace car replica (Lot #Y20-166) with just 14 original miles on the clock.

Chevrolet's '78 Corvette pace car replica was finished in a two-tone paint job of black and silver with a red pin stripe separating the two colors. Open the doors to the original silver interior that looks as if it has never been sat in, and it probably hasn't often considering the shockingly low mileage.

Tucked in the engine bay is the original 350-cubic-inch L-82 V8 engine with power shifted down to the rear wheels via an automatic transmission. All of the '78 Corvettes were equipped with Rochester Q-Jet carburetors. This car starts up and runs just like a new car, which it basically is a "new" 1978 Corvette considering it has only seen 14 miles of pavement over the past 42 years.

If you are interested in this time capsule 1978 Chevrolet Corvette Anniversary Coupe pace car that looks as fresh as it did when it rolled off the assembly line, this vintage Corvette (Lot #Y20-166) is up for bids through Premier Auction Group today. This is likely the lowest mile Anniversary Corvette in the world.