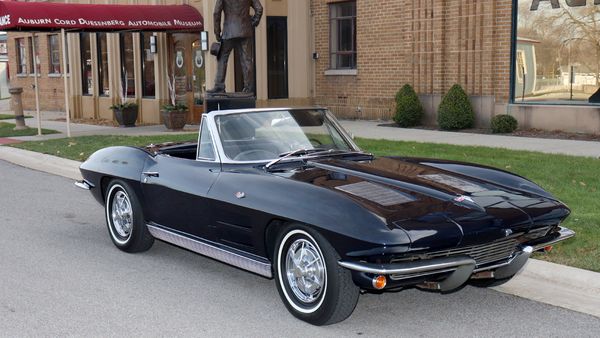 Offered by the Auburn Cord Duesenberg Automobile Museum in Indiana

The 1963 model year kicked off the first year of the second-generation Corvette, the first time the car had been changed in a full decade. The '63 was the final product of research performed on and off the racetrack for over half of that decade by masterminds Bill Mitchell and Zora Arkus-Duntov. Improvements were made over the previous C1 model with a major refresh in styling, handling, and performance. Combining the experimental Corvette with Bill Mitchell's Sting Ray dream car, the C2 Corvette came to life and was a huge success. Here is your chance to call this beautiful 1963 Chevrolet Corvette convertible your very own.

Finished in Daytona Blue, this '63 Corvette is in pristine condition. The optional removable hardtop also comes with the car to protect the convertible top and cabin while giving the car a streamlined appearance. Even the chassis was completely new and purpose-built with four-wheel independent suspension. Even more, the car stopped thanks to big drum brakes since disc brakes were still in the development stages. Powering this beauty is a 327-cubic-inch small-block V8 engine backed by a 4-speed manual transmission. This factory setup generates 300-horsepower.

Due to the unique rear split-window design, the '63 Sting Ray is considered to be one of the most desired and collectible Corvettes ever produced. It was a hot design and many were customized into a one-piece window instead of the two panes made of Plexiglass. Eventually, Chevrolet began selling replacement one-piece windows individually through its dealerships. A downfall to this was that the Corvette coupes started losing that collector value. This beautiful classic Corvette comes with the original window sticker and owner's manual.

To own this incredible 1963 Chevrolet Corvette Sting Ray Convertible, make a donation to the Auburn Cord Duesenberg Automobile Museum, a non-profit museum that displays some of the best vehicles in the nation. With a minimum donation of $25, each donation gets you tickets to be entered into the drawing. Use this code to get 25-percent more entries.